Six years ago I broke down the latest Pew study on the planet’s Muslims, pointing out that a large minority–as much as 42%–professed belief in the imminent coming of the eschatological Mahdi.  (This minority included Sunnis as well as Twelver Shi`is–contra conventional “wisdom” that only sects of Shi`ism adhere to Mahdism.)  My bottom-line take was this:

Several real-world policy ramifications for the U.S. State and Defense departments, as well as the IC (Intelligence Community), can be drawn from this Pew study. First, a civilization laden with eschatological expectations AND a historical track record of militant movements motivated by messianic leaders, infused with intolerance toward its own schismatics, convinced of ongoing problems with demonic entities and witches and in thrall to a literalist reading of a violent religious text might not be amenable to rational actor theory in international relations. Second, political consolidation and/or jihadist movements led by self-styled Mahdis should be considered as real possibilities in the twenty-first century, especially as we approach key dates such as the hundred year mark from the dissolution of the Ottoman caliphate (2024) or the year 1500 of the Muslim calendar (2076) — since Mahdism, historically, clusters around such important dates which spark attempts to create rival caliphates, often violently. 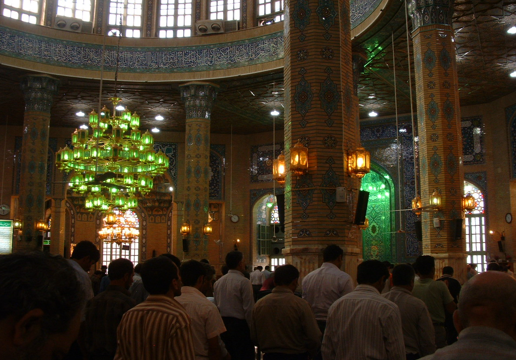 Iranian Muslims praying for the Mahdi to come (from my trip to Iran, 2008).

I could say I hate being right–but that would be a lie.  Earlier this month, according to “Channel News Asia,” Malaysian authorities arrested members of a group called “Asoib” (Arabic `asa’ib, “gangs, troops, bands”) who “planned to team up with another terror group in a Middle Eastern country to launch attacks….” Police Inspector-General Mohd Fuzi Harun “said that the Asoib group had misinterpreted the hadith…on Imam Mahdi, an Islamic redeemer who is believed to appear before the end of the world. ‘They…believe Imam Mahdi will appear in Mecca this year. This group will then team up with Imam Mahdi’s ‘army’ to fight secular countries and fight ‘the evil person,’ said Fuzi.” Another source said that “the men had planned to head to Yemen before proceeding to Saudi Arabia.”

Malaysia is 61% (Sunni) Muslim and has a reputation for being “moderate“–despite officially banning the practice of Shi`ism.  Yet even there, apocalyptic Islamic beliefs are clearly extant. And it’s amusing that that country’s top gumshoe takes it upon himself to explicate Islam–and in doing so gets things wildly wrong.  Having read all the relevant Arabic hadiths on the Mahdi, I can attest that his appearance in Mecca and subsequent formation of an army to battle secularism and a major “evil person”–by which was probabably meant the Dajjal, the “Deceiver” (Islam’s antichrist)–meshes almost exactly with “prophet” Muhammad’s sayings on the topic.  Asoib’s contention that the Mahdi will manifest this year is more edgy prognostication than a “misinterpretation,” for Islam’s “rightly-guided one” will come; it’s just the timetable that’s moot.

This Malaysian Mahdist movement may appear more of a nuisance than a real threat; but as I also pointed out a few years ago, it’s just a matter of time before the variegated strands of eschatological thought in the world’s second-largest religion come together to pose a definite danger to the rest of the world.

Addendum (9.29.18): Here’s a story entitled “Malaysian state to cane a third woman for infringing Islamic law,” which further undercuts the claim that Malaysia is somehow “moderate” in its Islam.