As some may know, I like writing about Middle-earth almost as much as the Middle East—more, in fact, since for all its horrors the former is fictional.

In 2016 Oloris published my High Towers and Strong Places: A Political History of Middle-earth.  (The companion volume, Bright Swords and Glorious Warriors: A Military History of Middle-earth, should be out next year—Eru willing.) I’ve also published several related articles: one on Tolkien’s Middle-earth story which discusses the Incarnation taking place there; and another on why he has Men (not Elves or Dwarves) killing dragons. 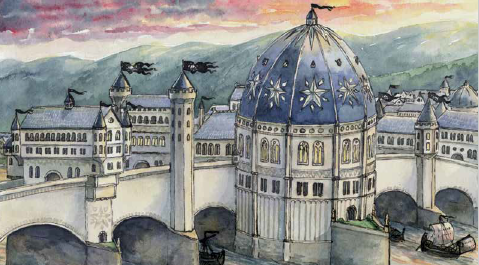 The underlying premise of both my Tolkien books is to treat the Secondary World of Middle-earth as realistic enough to merit Primary (Real) World treatment.  Tolkien himself made a number of statements justifying such an approach: “This history is supposed to take place in a period of the actual Old World of this planet” (The Letters of J.R.R. Tolkien, p. 220); also “Mine is not an ‘imaginary’ world, but an imaginary historical moment….” (Ibid., p. 244).

Most directly, in terms of embedding Middle-earth’s history into that of our world, he said the following:

[I]f it were ‘history,’ it would be difficult to fit the land and events (or ‘cultures’) into such evidence as we possess, archaeological or geological, concerning the nearer or remoter part of what is now called Europe; though the Shire, for instance, is stated to have been in this region. I could have fitted things in with greater verisimilitude, if the story had not become too far developed, before the question occurred to me. I doubt there would have been much gain; and I hope the, evidently long but undefined, gap in time between the Fall of Barad-dûr and our Days is sufficient for literary credibility, even for readers acquainted with what is known or surmised of ‘pre-history.’ (Ibid., p. 283).

Tolkien goes on to elaborate, in a footnote on that same page, on the “gap” between the fall of Sauron’s fortress and the 20th century:

I imagine the gap to be about 6000 years: that is we are now at the end of the Fifth Age, if the Ages were of about the same length as S.A. [Second Age] and T.A. [Third Age—at the end of which, in the year 3019, the War of the Ring was fought.] But they have, I think, quickened; and I imagine we are actually at the end of the Sixth Age, or in the Seventh.

I had thought I had read everything Tolkien had had to say on relating Real World history to that of Middle-earth (besides all of Tolkien’s writings, peruse the legions of others listed in the 11-page bibliography to High Towers).

But I was wrong. In the latest (and probably last) volume of his works, The Fall of Gondolin (2018), there is this striking passage:

Glory dwelt in that city of Gondolin…and its ruin was the most dread of all the sacks of cities upon the fact of Earth. Nor Bablon, nor Ninwi, nor the towers of Trui, nor all the many takings of Rum that is greatest among Men, saw such terror as fell that day…. (p. 111).

Gondolin was the grandest Elf city of the First Age, a hidden fortress armed against the might of Morgoth, the satanic and original Dark Lord of Middle-earth with whom the Elves were at war (and for whom Sauron, the scourge of the Second and Third Ages, was but an aide-de-camp).  Its location was betrayed by an Elf traitor and an enormous army of Orcs, Balrogs (one of which dragged Gandalf off the bridge in Moria) and dragons then destroyed it, along with most of its inhabitants.

It is fascinating that Tolkien’s narrator for this epic story—set some 6500 years before the events of The Lord of the Rings—refers to events from the Real World: the fall of Troy (Trui) to the combined Mycenean Greek forces, which took place about 1200 BC; the destruction of Nineveh (Ninwi), the capital of the Assyrian Empire, about 612 BC;  the conquest of Babylon (Bablon) by the expanding Persian Empire in 539 BC; and the capture and sack of Constantinople (Rûm) by the Crusaders in 1204 AD, and its final demise at the hands of the Ottoman Turks in 1453.  As far as I know, this is the only time in Tolkien’s writings he so straightforwardly connects the histories of Earth and Middle-earth.  Why would Tolkien write this (and his son and editor, Christopher, include it) except to imply that Gondolin was as real a place as Troy, Nineveh, Babylon or Constantinople?

“Rûm,” by the way, is the Arabic name for the Eastern Roman/Byzantine Empire–for Constantinople writ large, as it were.  Tolkien’s usage of the Muslim Arab, and later Ottoman, term for this city and empire is another fascinating aspect of this passage from The Fall of Gondolin.

As noted above, Tolkien dated the fall of Sauron in Third Age 3019 to about 4000 BC.  That would date the Fall of Gondolin to approximately 10,540 BC.  The Göbekli Tepe civilization of southern Anatolia is dated to around 9000 BC.   Perhaps the fathers of Men did have dealings with the exiles from Valinor.